We believe by faith that man was an instant creation of God, as all creation was spoken into existence. He was created in the likeness of His Creator (body, soul and spirit). He was created with a mind and will, and thereby responsible for his decisions and sins. He was also born with a sin nature therefore making him a sinner. Because man is a sinner and sins, man is guilty and will spiritually and physically die spending eternity separated from God in a place called Hell unless he recognizes his need for the Savio.
(Gen. 1:25-27; 1 Thes. 5:23; Heb. 4:12; Gen. 3:1-19; Rom. 5:12; John 8:38-44; Rom. 3:23; Is. 53:6)

We believe by faith that man needs a savior, Jesus Christ being that Savior. This salvation is a free gift with no contribution of human merit or works. Salvation is our response to God’s initiative. It is faith in the Biblical facts of Jesus Christ, our condition, and God’s work, accomplished by the Holy Spirit, which allows a sinner to be changed and Heaven bound.
(John 1:12; Eph. 1:7; 1 Peter 2:24; Eph. 2:18-19; Rom. 9:10-13; 2 Peter 1:4; John 5:24) 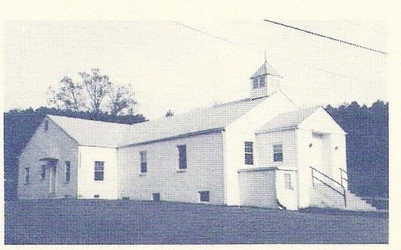 Given the responsibility to spread the gospel of Jesus Christ, members of Linden Ave. Baptist Church organized Sunny Lane Mission. The first service on Sunny Lane was held on March 8, 1953 with Rev. J. H. Chance. Three months later the name changed to Pleasant Ridge Missionary Baptist Church to better describe the area and community being served. With 23 members, the new church called Rev. W. A. Roop as their first pastor on September 2, 1953. Later in September of the same year the small building was enlarged to add more classrooms and a vestibule. In 1953 the church ordained its first pastor, Rev. James Maples and according to records, is the only pastor to have been ordained in the history of the church.
In 1954, the church enlarged its property by purchasing an adjoining lot (1 acre of land) for $378.00. During this time, the building was enlarged again to create more classrooms and a basement. In 1955, the church experienced financial difficulties. Rev. Maples suggested a decrease in his salary and later that year resigned as pastor.
On April 10, 1955 Rev. R. E. Morton became the church’s new pastor. He wrote out the Articles of Faith and helped them join the Knox County Association of Baptists and the Southern Baptist Convention. He was pastor until his death in September, 1964. This left the church without a preacher until early 1965. That year, the church called Rev. F. W. McCarter their pastor. Under his leadership new pews and pulpit chairs were purchased that are still in use today.
In 1966, a lot was purchased for use of a parsonage. The parsonage was completed in late 1967 at the expense of around $12,000. Also in 1966, the property on Merchants road was purchased for a new church building. In 1972, the old church building was sold to another church. While the new building was still in construction, the church members held services on Sunday at Pleasant Ridge School and Wednesday at the home of  Mr. And Mrs. Howard Ritter for 14 months.
With around 30 members, the change of name was voted unanimously and on April 12, 1972 the name was changed to Northwest Baptist Church upon relocation to Merchants Road. The completion of the church building occurred in September 1973 and the first service was held on September 16 that year.
In 1974, Rev. McCarter resigned after about 10 years of service. The pulpit committee procured Rev. George Trusler to serve as interim pastor. In 1975 on May 21st, the church purchased the piano for $700.00 and is the current piano in use today. In 1977, Rev. Trusler resigned.
In July of 1976, Rev. Andy Long was called as pastor. In June of 1977, the treasury had only $27.88. From 1977-1988, church records were lost most likely due to the fire that occurred in 1984. It is known that in 1979, Rev. Ruble Thompson was pastor, followed by Rev. Larry Wayne Sykes in December of 1983. While Rev. Sykes was pastor, the church caught fire in December of 1984. The fire was started by unknown suspects attempting to siphon gas from the church bus. The bus ignited and the fire spread to the building. Services were held at Northwest Middle School until the church was rebuilt. The first service in the rebuilt church was held Easter Sunday 1986.
In 1986, Rev. Homer Cate was interim pastor. In June of 1987, Rev. George W. Gilbert took leadership. Rev. Gilbert resigned in 1998 and was followed by Rev. Johnny Gray. In Sept. of 1999, Rev. Jason Grant was voted in as pastor. In Nov. of that same year, a re-vote was cast to vote Rev. Grant out. His original member approval was 92% but only two months later he was voted out with 52% member approval.
In 1990, the fellowship hall was proposition and $150,000 was loaned. On Sept. 23 another $50,000 was loaned to the church. The fellowship hall was finished in 1991 on Jan. 9th. It was paid off for entirely in 2008.
In 2000, Rev. George was voted interim pastor. In 2002, Rev. Jay Galyon was voted in until May of 2006. In Sept. of 2006, Rev. John McGaha was voted in as pastor and is currently in leadership today.
Northwest Baptist was offered the opportunity to purchase land of an adjoining property (12 acres of land) for $100,000.00. The church voted to collect at least a third of the money before purchase and within a few months collected over $10,000.00. On Dec. 27th, 2013 a person outside the church named Opel Roberts upon her death, willed the church $321,000.00. The total was now over $340,000.00 and the church purchased the land at a final price of $101,517.52.
In Sept. of 2014, the church moved to remodel, pave the parking lot and add new bathrooms and entry way. The church voted $60,000.00 be used for the driveway and $150,000.00 for the building. The remodel would be done with the remaining money being sure to leave no less than $20,000.00 in the general account.
Today, the church has been transformed due to the grace of God. We owe everything we have been able to accomplish to God. Without His benevolence we would not have been allowed such a wonderful opportunity to serve and worship Him.
Proudly powered by Weebly